Convert its returns into US dollars and it looks miserable.

In the last decade the S&P 500 shot up nearly three-fold, while the JSE Top 40 (in US dollars) struggled to gain just 20%. Image: Moneyweb

The JSE Top 40 index looks reasonable when measured in steadily-depreciating rands, but measured in US dollars it looks miserable.

The following chart from Morningstar compares the JSE’s Top 40 index in US dollars with the S&P 500.

The S&P 500 shot up nearly three-fold over the last 10 years, while the JSE Top 40 (in US dollars) struggled to gain just 20%. And that’s after accounting for the massive buoyancy of tech-heavy Naspers, which accounts for nearly a quarter of the Top 40 index weighting.

After crashing at the start of the Covid lockdown, the S&P 500 index has now surpassed its pre-lockdown level. 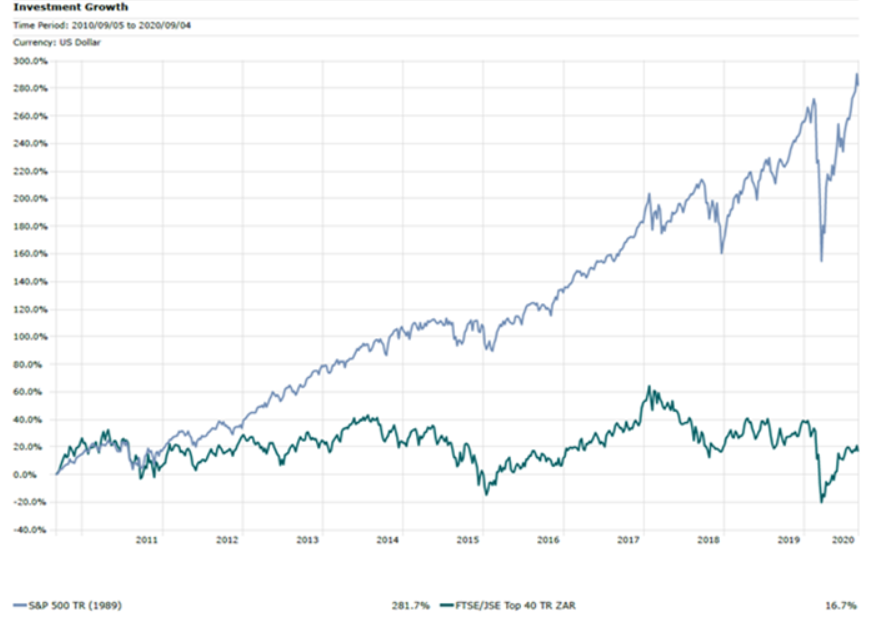 “These extraordinary gains have been denied South Africans pinning their hopes on a JSE with a tiny pool of 400-odd stocks, accounting for less than 2% of the world market,” says Pierre Cloete, CEO of specialist offshore advisor International Wealth & Prosperity (IWP).

“I’ve been advocating an aggressive offshore investment approach using low-cost passive index funds for the best part of a decade, for the simple reason that the JSE has been going nowhere over that period of time when you measure it in a currency that really counts – like the US dollar.”

Many South Africans have demurred about taking a more aggressive offshore position, believing the country would eventually come right.

Cloete says it could be a long wait for those expecting a sustained economic recovery.

Pockets of opportunity in SA

Adriaan Pask, chief investment officer at PSG Wealth, argues that there are pockets of opportunity in SA not reflected in the Top 40 index.

“Our domestic bonds offer some of the best value around, and many South Africans might say that offshore equity markets are expensive. I’d say it’s hard to argue with that.

“There are many bombed-out businesses suffering from the lockdowns that will survive and recover, and there will be some great opportunities in the next couple of years.”

The World Bank forecasts an economic contraction of more than 7% this year as a result of the pandemic, while others expect it could even contract 10%.

Michael Power, global investment strategist at Ninety One, told Moneyweb last week that about 70% of sovereign debt around the world currently has a negative real yield. “The 60/40 split between equities and bonds is being jettisoned because it is simply not yielding enough,” said Power.

Those holding sovereign bonds with negative yields are harming their overall portfolio performance. One option is to hold cash in a strengthening currency, such as the Singapore dollar, or Asian real estate and bonds. Gold, too, offers protection against negative yield bonds and future uncertainty.

Cloete says taking an aggressive offshore position in equities (such as a low-cost S&P 500 tracker fund) has been proven to be a long-term recipe for building and accumulating wealth. He cautions that investors need to pay attention to fees, since these can dampen returns over time.

“Leaving your savings in SA exposes you to all sorts of risks: that the rand will remain relatively strong (it will not); that the JSE will rebound on the back of a strong economic recovery (there are too many structural problems for this to be anything but a flash in the pan); that the fiscal cliff facing the country will be masterfully navigated by the Department of Finance (doubtful). And that the thieves who stole the state capture jewels will be sent to jail (also doubtful),” says Cloete. 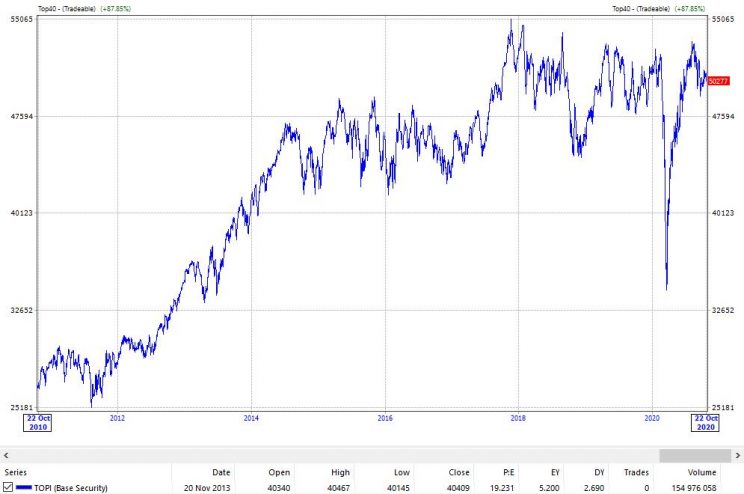